A new layout in the making!

This page is to be updated as work progresses.

Please call back to check progress

The first steps was to obtain suitable timber (Planed Square Edge - PSE) and sheet boarding for the tops. For this project I am trying 11mm thick OSB3 board (Orientated Strand Board). Underside outer framing will be of 69mm x 18mm PSE and cross bracing at 300mm intervals made of 44mm x 21mm PSE. These will before fitting, have three 15mm dia. holes drilled in them nearer to their top edges. These holes will allow for later wiring runs.  The deeper outer framing will help protect the point motors and other underside electronic items and give good rigity and strength, while the smaller cross bracing timbers, when installed narrow edge to baseboard, give strength to the top but reduce overall weight. Fold up self contained legs will be added too.

The first frames and tops are constructed

Fold up legs are constructed from 44mm x 21mm PSE and braced apart by two horizontal timber braces which are screwed and glued to the legs. Each leg has an adjustable foot and 200mm Tee hinges are used to act as the pivots.  Each leg is braced in the open position by a diagonal timber strut with Back Flap hinges at each end. See details below

To allow the fold up legs to be stored within the framing of each baseboard yet still allow the leg to be firmly locked in the down position 32mm Back Flap hinges are used at both ends of the strut. Each hinge has its original pivot pin removed and discarded and a split pin on a short length of chain is used to retain the struts firmly and securely. These make folding up the legs very quick and simple. 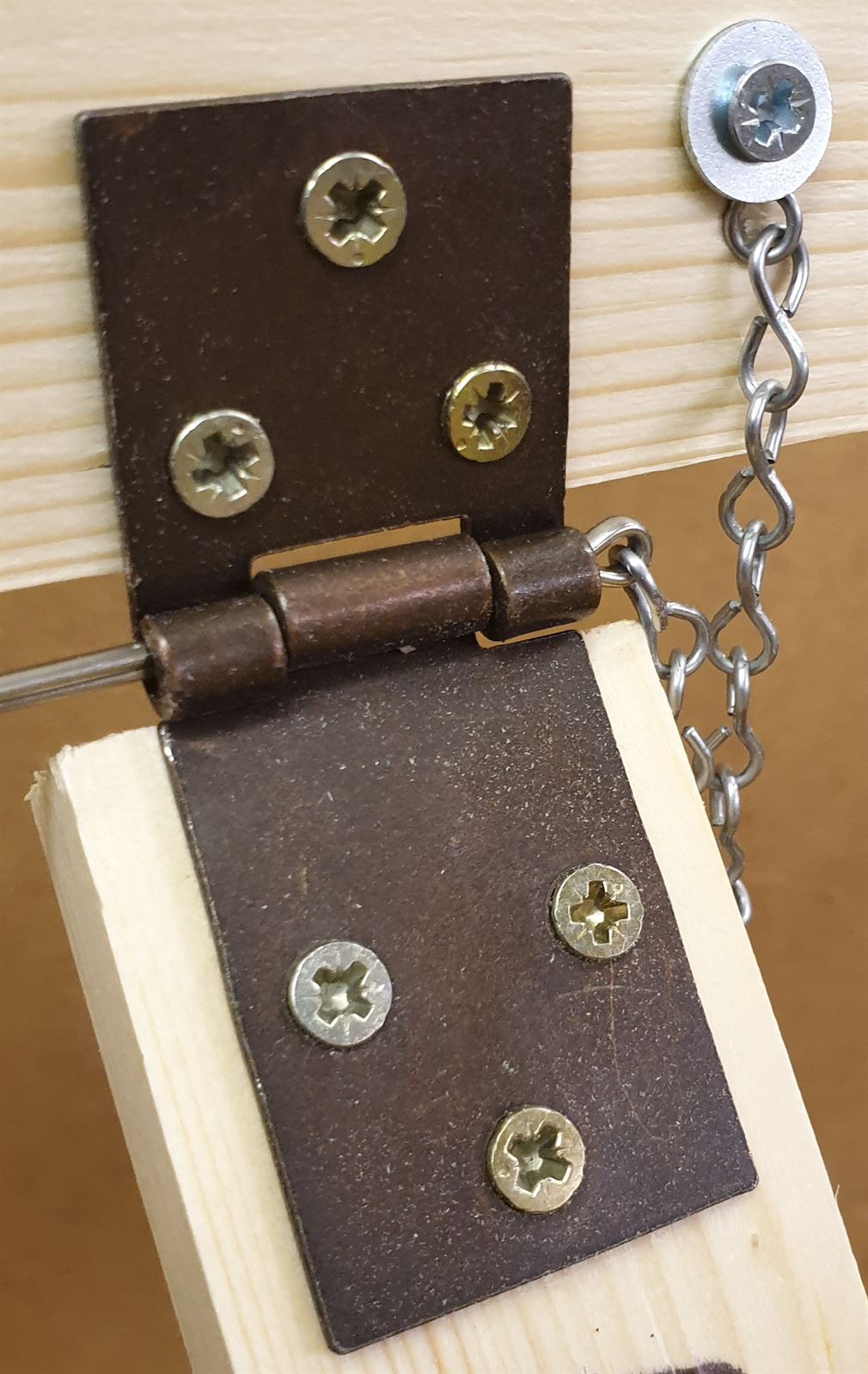 I have so far constructed five of the seven baseboards - Nos 3, 4, 5, 6 & 7 are ready for a coat of varnish or dilute PVA to seal them and then once dry I need to make room for the last two boards in the garage by moving them all forwards. 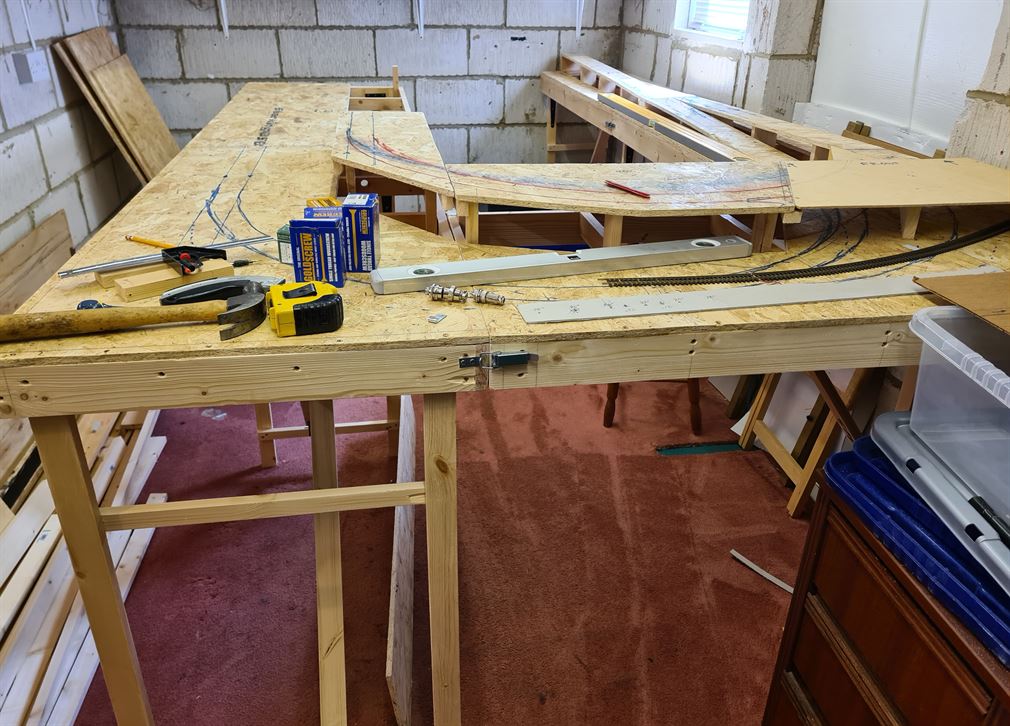 Baseboard top for board number 2 cut to allow for the upper level/raised section and the turn towards board 1. Next is to make the framing. But that will have to wait for a day or so now!

All seven baseboards have now been constructed and assembled to form the layouts rectangular shape. All surfaces have been sanded and then given a coat of dilute PVA adhesive to act as a general sealant.  Next track laying commences! 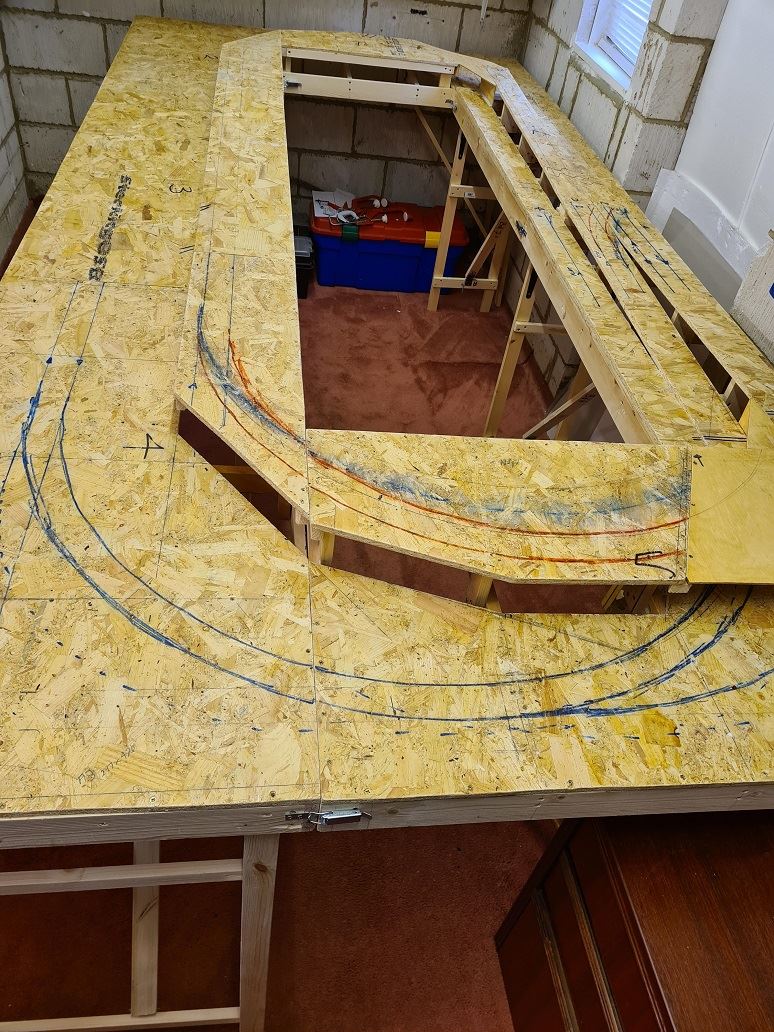 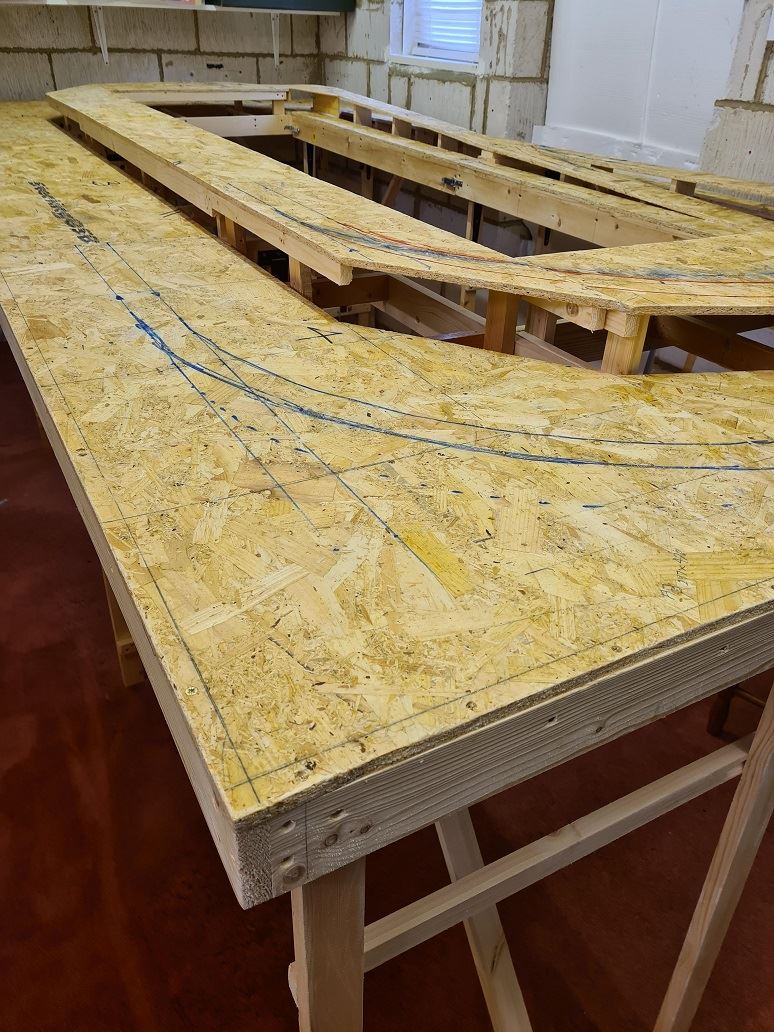 Next item to be tackled was the electrical connections baseboard to baseboard. For this I have opted for two different sized 'Aviation' plugs and sockets in four way pin/socket per connector.  I have chosen 16mm and 20mm diameter connectors, the larger being used for the DCC pair of feeds and 12volt DC power for all the electronic boards and Servo motor drives, while the smaller is used for CBUS data lines and two spare pins. By using two of differing sizes there is no chance of accidental cross connection occurring.  The Aviation sockets have a threaded protrusion on their front onto which the plugs securing ring locks the plug tightly onto the socket. The problem being if these sockets are mounted onto the front surface of the support framing timbers they extend out beyond the front edge and are then likely to be knocked or damaged during any later transportation of the layout.  So I decided to drill two holes for each socket and also allow finger room too for tightening and removal of the plugs. A hole of 32mm diameter was drilled for the 16mm socket while the 20mm socket has a 45mm diameter hole.  The sockets were mounted onto 6mm thick ply and that is bolted to the rear of the bracing timbers.

Now commences the track laying!  I have a lot of Peco Streamline code 100 points taken up from the former 'Elmswood' layout and some sections of flexible track too, plus a new box of 25 lengths of SL-100 track. So this has to the choice, as it would be wasteful to go over to Code 75 profile track. In fact I've not had any issues with Code 100 looking too large, especially once its rail sides are painted rusty colour and the track ballasted.

Track laying is a slowly coming together and I'm now around 75% completed. I have today run out of 1.6mm thick Copperclad board which once cut into approximately 4mm wide strips is used for retaining the rails at baseboard joints. More is on order but I.m now at the mercy of the postal system! Track laying is slow as each piece of track has to have a pair of dropper wires soldered to the rails undersides before laying that section. Gaps in sleeper spacing will be made good before ballasting.

I have at long last completed 99.9% of all the track laying! Only ends of sidings to sort once buildings are purchased - Engine shed, Goods shed etc. 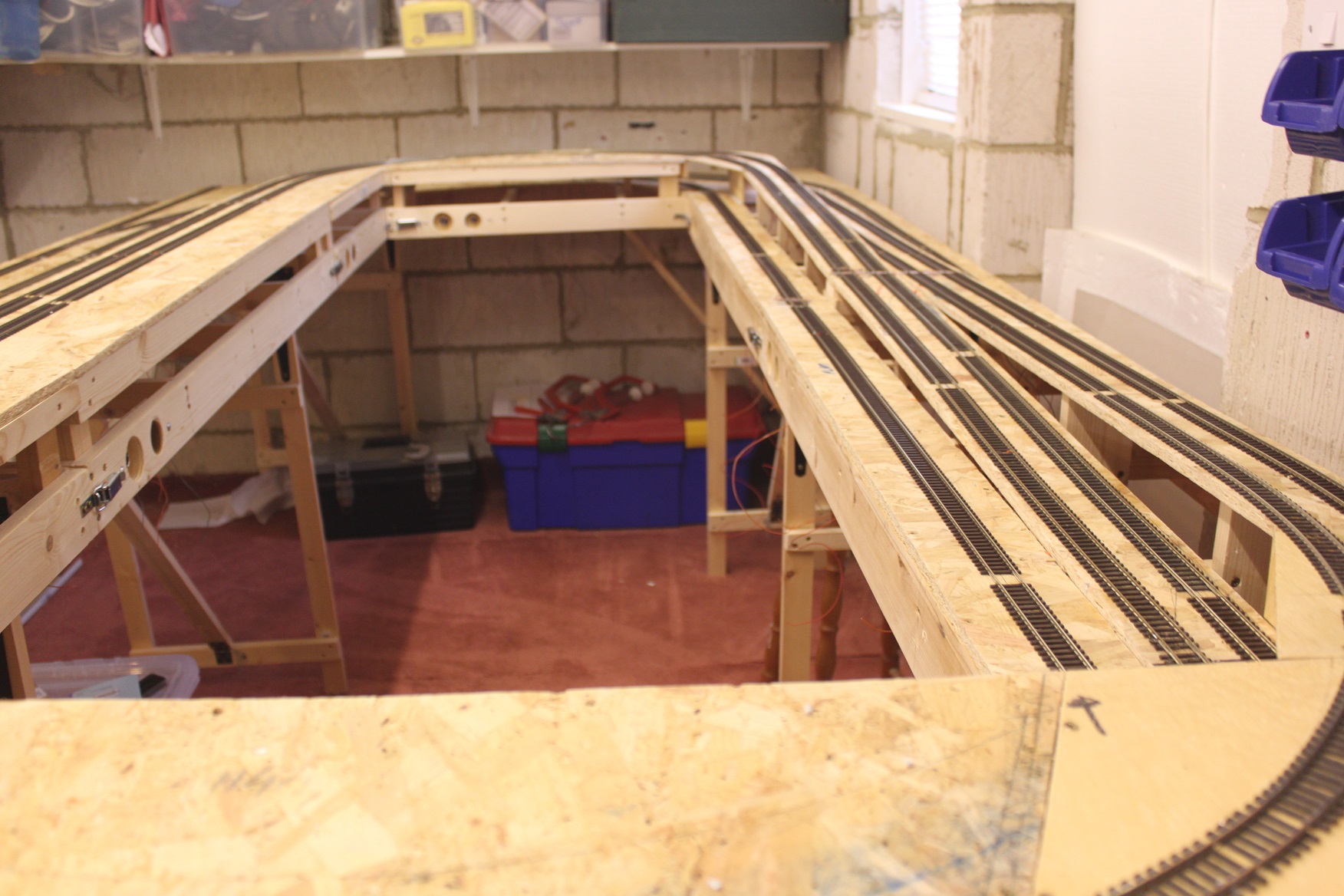 So onto the installation of the under baseboard wiring!..... 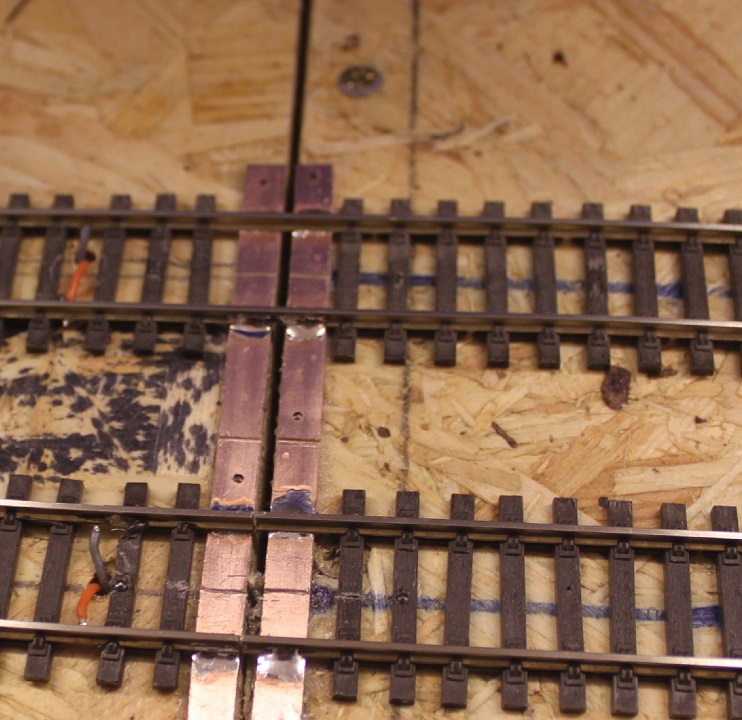 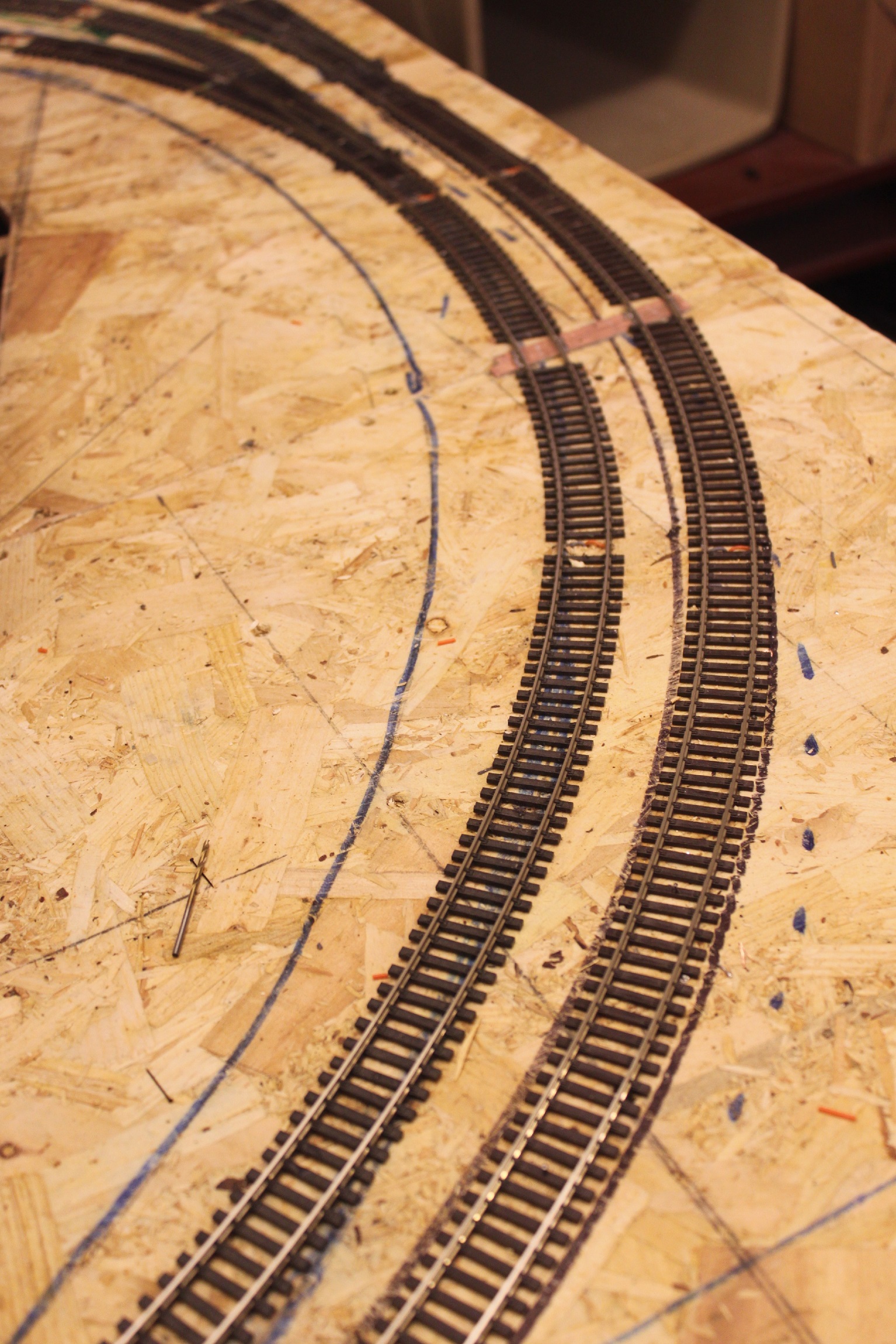 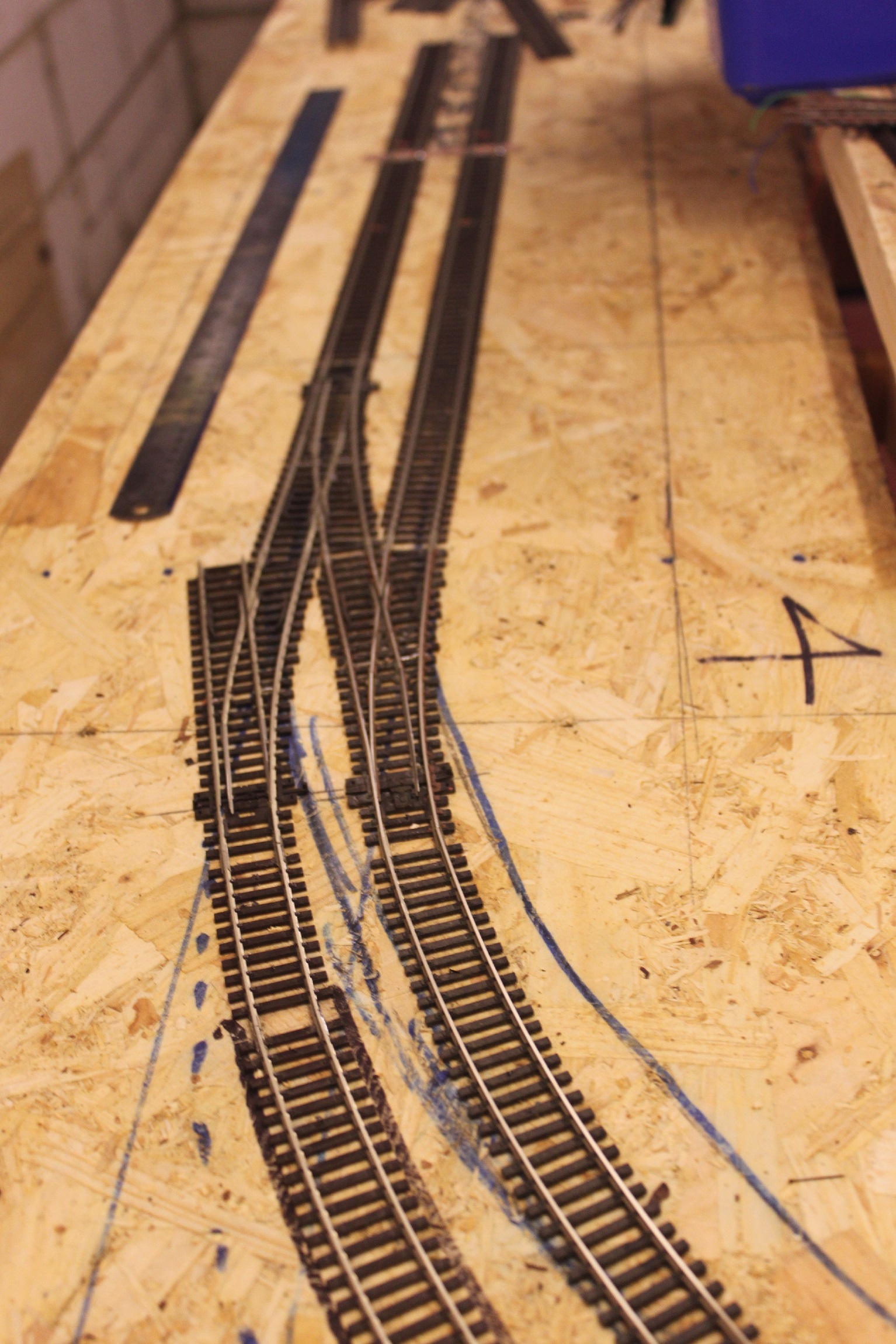 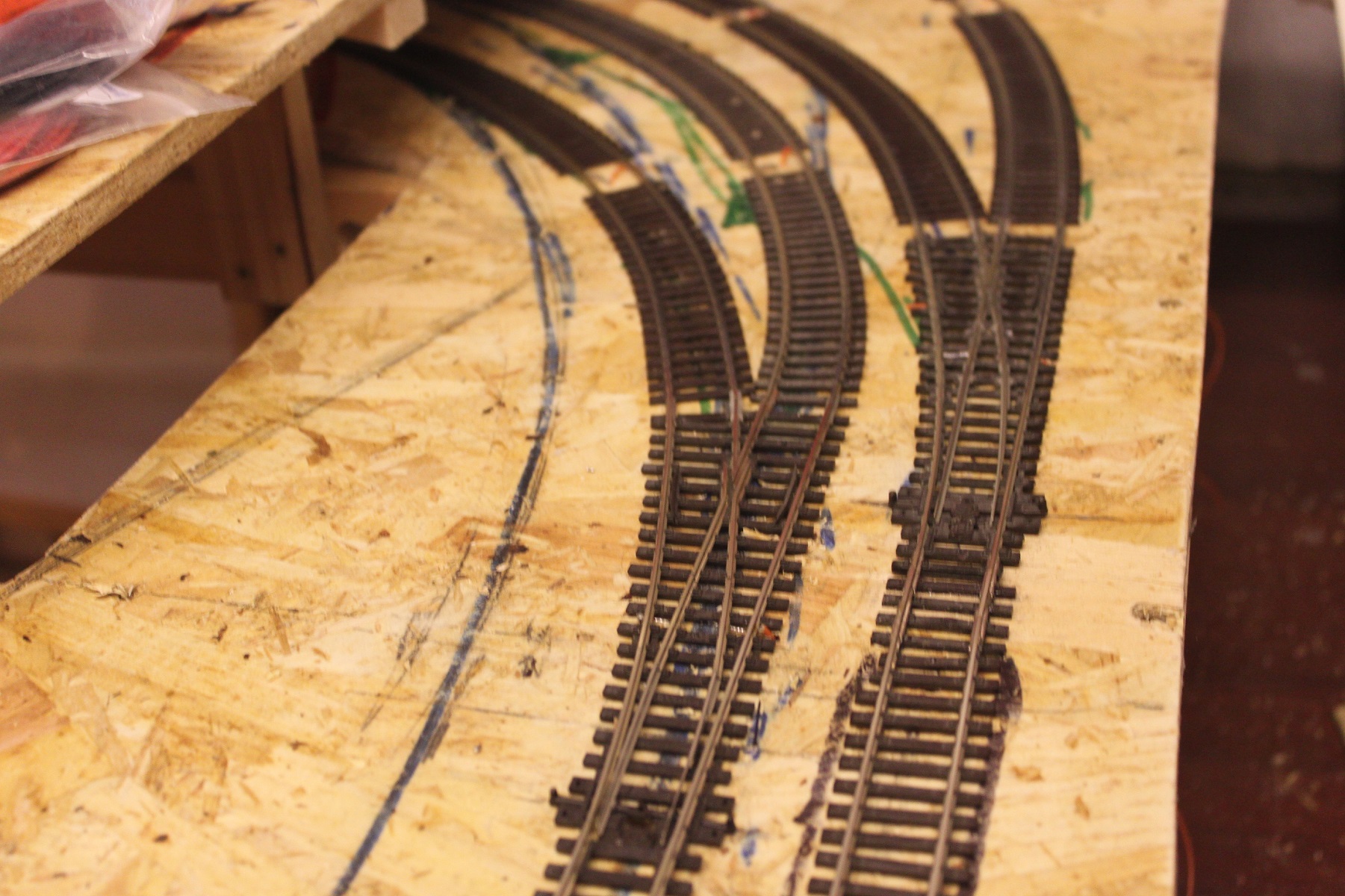 Wiring of the baseboard commenced.  As I'm using a CBus network around the layout for all points, signal and indications, only a twisted pair of wires are needed for this, with all CBus modules tapping off this pair of wires. In addition a 12 volt DC power supply is needed for all the modules, Servos and anything else that may need to be powered later on (e.g. Colour light signals, Building and Street lighting possibly?).  Plus of course the DCC pair of Bus wires. I have additionally allowed a spare pair of connections across each baseboard joint for anything else later on.  Wires are: DCC Bus pair 32/0.2mm in Orange and Grey. 12 volt DC power in 24/0.2mm in Red and Black. CBus Data pair twisted of 7/0.2mm in Yellow and Blue and finally the unused for later possible use are a pair of wires in 16/0.2mm in Green and Brown.  I have opted to use 'Aviation' connectors as shown above, and they are in a 2 by 4 way pin/socket arrangement and these can be seen now wired in the pictures below.  Note the DCC and 12 volt DC plug and socket are larger than the data and spare pair connector is, this is to prevent accidental cross connection occurring.

Below shows the simple means of connecting all the Dropper wires from the rails above onto the DCC Bus pair of wires uses two loops of copper wires stripped from main cable and inserted into one side of a four way terminal block. The bus 'in' and 'out' wires connecting to the opposite side on the block. Then all the droppers are soldered to the two copper wires.

All my points are to be operated by Servo motors and a single micro switch operated by the Servo's arm flips the Electrofrog points frog rails polarity. These are shown below.

In the two images above and fitted on the right hand side of the Servo mounting bracket can be seen the small Micro switch. As the servos arm moves over from the current left position to the righhand side it compresses the micro switches lever which causes the internal contact inside the micro switch to change-over and in turn flip the electrofrog points polarity.

After weeks of baseboard building then making up electronic control kits and wiring it all I was at long last able to power up the DCC system and place a couple of locos on the tracks and let them run the complete circuit of tracks in both directions. One baseboard track joint was found to be slightly out of line and a quick heating up of the copper clad sleepers soldered rail joint soon had the rail back in place. The first two locos, one with a couple of carriages behind it, can be seen above.